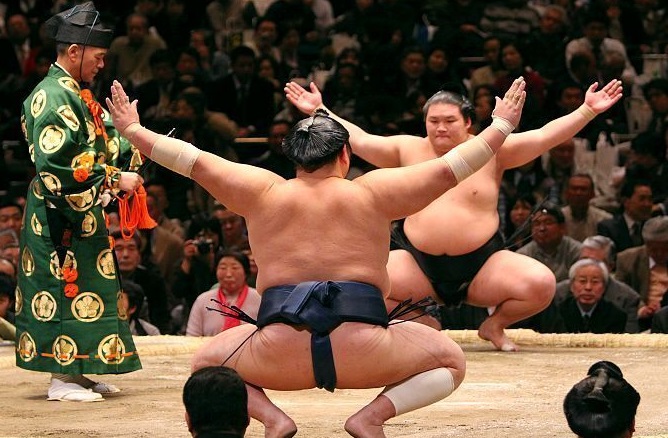 Sumo is a wrestling contest usually between two wrestlers within the circular ring. The prime objective is to push the opponent out of that ring or force them on the ground. Before every bout, wrestlers spend multiple minutes on the warm-up session by stomping, squatting, and extending their arms. But if you think that’s the only thing you need to learn about sumo wrestling, you are certainly wrong. Here’s presenting the lesser-known and most intriguing facts about this contest.

Compared with the majority of sports in today’s world, Sumo evolved some ages ago. Around 1,500 years, this sports contest got evolved. From its beginning, it has got entwined with the Shinto ritual. It used to get performed at the shrines, ensuring a bountiful harvest. Honoring the holy spirits was also another reason why the games got held near the shrines.

#2 The rules are not that complex

A sumo wrestling match does not begin until the wrestlers place both their hands on the ground simultaneously. That can lead to a lot of faffing when each wrestler aims to psyche another out. But once they begin finally, it’s rare for the sumo bouts to last longer than just a couple of seconds! A match will end when one wrestler is thrown out of that ring. It might happen when any part of the body apart from the soles of feet drops on the ground.

#3 Sumo life is not that straightforward

It’s easy to assume from the famously substantial girth that a wrestler lives a life of excess outside the training. But in reality, their lives are rigidly regimented & disciplined ones. There’s a balance that the sumo wrestlers need to maintain when it comes to eating, training, and sleeping throughout the career: until and unless they are married.

#4 Not all sumo wrestlers are heavyweight

The structure of the sumo suits used in parties and other celebrations indicates that sumo wrestlers are usually fat. But according to history, wrestlers developed their chubbiness once they became famous. And not all sumo wrestlers are heavyweight!

So, there you have it! These are the lesser-known facts anyone would enjoy and find interesting to read. But Sumo is fascinating, but this sport has an uncertain future, given the harsh lifestyle that makes it more difficult to attract newer recruits.